Providing Comfort to Patients & Their Families

For over 60 years, the Huntsville Memorial Hospital Auxiliary has been an integral part of the hospital services. From running the gift shop, developing craft projects, and transporting patients, to providing ready smiles and encouragement to patients and visitors alike, this group of volunteers has shown the true meaning of service to others. Huntsville Memorial is truly privileged to have this dedicated group of men and women volunteering in our facility.

The Auxiliary includes approximately 60 active members and we are always looking for others who would like to give their time and energy to the people of our community. Some of the most common duties include working the gift shop, the OR waiting room, the ER waiting room, the information desk, patient mail deliveries and transporting/discharging patients.

During the 1960’s, the volunteers petitioned the County Commissioners to hold a bond election for building a 35-bed Chronic Care Facility. After Walker County voters passed the bond resolution, the addition to the hospital building on Avenue O began and was completed in 1964. The Auxiliary funded the furnishings for two patient rooms in the new wing. Other projects in the 1960’s and 70’s included dispensing Sabin oral vaccines against polio to Walker County residents, opening and staffing a snack bar in the hospital, developing a junior volunteer program, establishing scholarship funds for nursing students and developing an auxiliary newsletter.

A long-standing project of the Auxiliary has been providing scholarships to assist nursing students. Through a donation from the late educator Dr. Margaret Powell, the Auxiliary established a four-year scholarship fund in 1984 for Walker County high school students planning to pursue a college degree in healthcare. Other scholarships have also been awarded to students in the hospital’s Joe G. Davis School of Vocational Nursing, and the Auxiliary has held receptions for the graduating students. Special grants have been given to students working towards an RN degree.

The Auxiliary continues its tradition of raising funds for hospital projects through book fairs, jewelry sales, bake sales, vending machines, and gift shop sales. These sales have allowed the Auxiliary to purchase needed equipment and to fund renovations in many areas of the hospital. 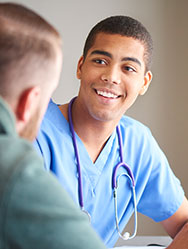 HMH has provided healthcare for our community for almost a century! We’re proud to be a long-term pillar in Huntsville, Texas.

History
We are so fortunate to have this hospital with great nurses and doctors. My husband and I have both used HMH and had the best experience. New modern equipment and people who know how to use it.
★★★★★
Carolyn - Huntsville, TX
Leave a Review